The Naming of the Parts

With apologies to Henry Reed

But the act of Jane being a ‘pusher’ for this heady cocktail of emotional potions is dangerous to Eve, too. She must feign intimacy at least, and may even offer a circumscribed version of it.

… seen in our last episode….

I am an engineer, and a hacker. I approach problems in a particularly methodical way, and where it’s helpful, I build a model of the thing I’m trying to figure out. (“All models are wrong, but some are useful.”)

And my ruminating on my ‘relationship’ with Eve led me to want to answer a particular question that I didn’t even have the right language to ask precisely. I had a meeting with my counselor the other morning, and I wanted to kick it around with her, so before I went I built a model – 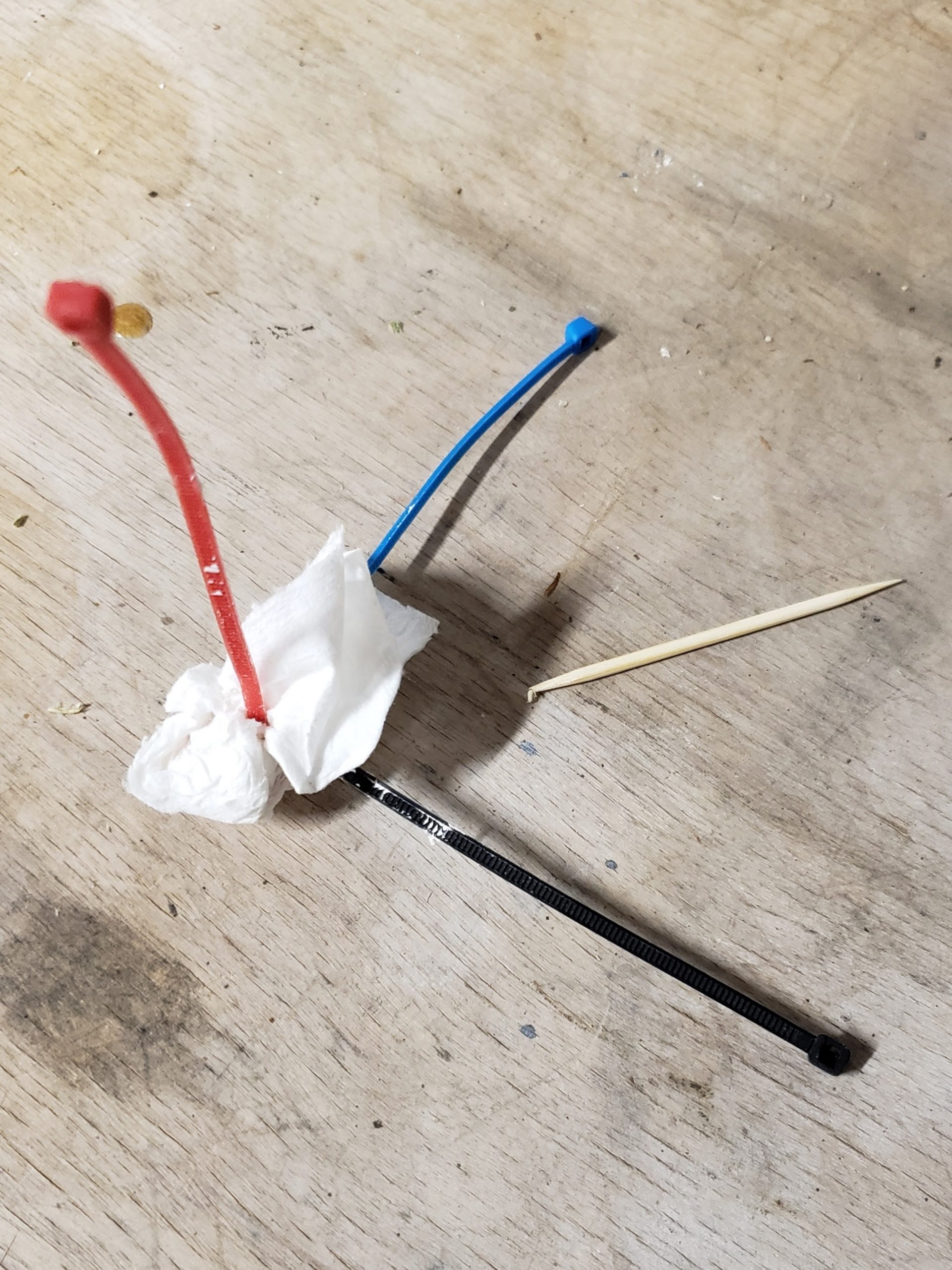 Let’s pretend that those wire ties are at mutual right angles, and that they are axes for independent dimensions in emotional space. (The location of the toothpick will become important shortly.)

The red one should be labeled ‘Carnality‘. It’s a raw measure of the physicality or sexuality present in a relationship. The zero point could be a Victorian maiden, in ankle- and wrist-length dress and parasol, as modest as one could be. The extremum could well be what I have seen some models do at aSite, where they perform the most explicit acts upon themselves in their public ‘chat rooms’, knowing that any rando on the internet could be anonymously watching them. (I guess that actually sitting out in RL public and performing like that would be a bit more ‘out there’, because there’s no pretense of invisibility behind the ‘fourth wall’ of the internet.)

Now – here’s the crux of my description problem.

There are two other axes here, and they measure different things. I am certain of this because Eve and I differ fundamentally along one of them. But I’m having a really difficult time teasing them apart.

The black one could be labeled ‘Intimacy‘ (I think). It is a measure of how much ‘shared detail of life experience’ the relationship has. As an example, you surely wouldn’t talk with a complete stranger in any detail about the very difficult time your sister and brother-in-law are having in their marriage; you might be a little more forthcoming to a very close friend; you are much more likely to discuss and ponder this with your already long-term life partner. Of course, another aspect of Intimacy is how much each partner knows about the history of the other – not only the literal details, but also the way that other person has been shaped or emotionally colored by their experiences.

The blue one I can’t even hazard a label for. If you have noticed that my model looks suspiciously like Robert Sternberg’s ‘triangular theory of love’, give yourself a gold star. So, in his terminology, this third axis should be called “Commitment“. If you read that Wikipedia article, it’s a somewhat-fuzzily defined measure of how much the two partners are mutually loyal and supportive, how much they have promised (explicitly or implicitly) to do what is needful to build and maintain the strength and longevity of the relationship. I’m willing to take that label as a starting point for this discussion.

Here’s another picture of my model, with a bit more stuff added –

Each of those pieces of paper is an indication of a possible range of relationships, at various levels of each emotional component.

And here’s where Eve and I differ. That lower (right-hand) pie wedge of paper, flat between the black and red axes, is what she can and does offer. That grey smudge is about where I’m guessing her feeling for me were – she was willing to chat (had chatted!) with me about very personal details of her RL (like the ‘bad luck with boyfriends’ shtick that got me in trouble, but several other things, too). And she had listened carefully and attentively to the things that were of deep interest or concern to me, and responded to them authentically and compassionately.
And ofc she had been very, very erotic with me. (YOWZA!!!!)

And I – I’m firmly attached to that upper sheet. Note that it is sticking up at about a 45° angle between the blue and black axes – in the direction of that toothpick in the first photo. (Hey, work with me here! Pretend it’s all linear and planar and orthogonal and neat and tidy….) For me, any relationship that gets to that level of Intimacy necessarily has to have a near-equal amount of Commitment. I want relationships out in the ‘blue blotch’. And I imagined (my error – not because I was being deceived or anything remotely like that) that Eve wanted to be there – was there – also. Nope!

In fact, until building the model, writing this all down, and puzzling over the disconnect between Eve‘s and my assumptions about our ‘relationship’, I hadn’t even realized that I had these two emotional measures tied together – or that everyone else didn’t have the same linkage.

Back to the quote at the top of the page.

[NOTE: During the time I wrote the first draft of this post, I had essentially ended it here, and then taken a break for a while. This gave me a chance to substantially re-think the following:]

The fear I expressed there, and in the Postscripts, is misguided, pointless, and at one level rather an arrogant projection on my part.

Eve is as happy as she wants to be. Even if she isn’t, I can’t change that. She doesn’t need – she doesn’t want – to be involved with anyone at this time.

And as she told me the first time I ‘crashed and burned’ with her (oh you mean I forgot to mention that I had tripped over exactly this same damned curb three different times in less than a year watching Jane?!?!! Yeah, some of us are slow learners….) –

As she told me then, when I made a sardonic remark about playing on cam being ‘Fun – not romantic – not intimate’, she replied “[It] can be romantic and intimate and etc. if you like that as long as you don’t fight with me” about the limitations. Meaning no Commitment, ofc, and all the things that commitment might imply, like something F2F, etc.

And she does not ‘feign intimacy’. For her, Intimacy really is going out the black axis as far as we want to take it. And she will go a long way out. Out black, but not ever up blue.

But black without blue is only half of what I need.

Sweetheart, if you are reading this, please know that I finally ‘get it’ (I think). And I’m not in the least bit upset with you about how this turned out.

And I don’t want you to think that I am trying to ‘judge’ you, or ‘fix’ you, or change you in any way. I don’t think there’s anything wrong with you for being the way you are about Intimacy and Commitment. It seems to be working just fine for you, and I’m glad for that.

It’s just not the way I am, which is my issue to deal with.

This entry was posted in about living, big ideas, evobio and related stuff, life weirdness, sex and relationships. Bookmark the permalink.

This site uses Akismet to reduce spam. Learn how your comment data is processed.